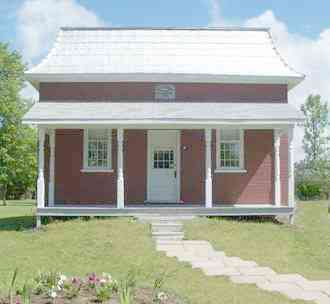 This single, detached brick building with a  Mansard style roof was originally built for George C. Forbes  as a reading room (library) for the village of Newington in 1901.  This building one of the most historic buildings in the Township of South Stormont,  constructed as a public institution. The Forbes Memorial Reading Room was given as a gift to the community of Newington in the name of Mrs. Peter Forbes (Isabella), mother of George C. Forbes. 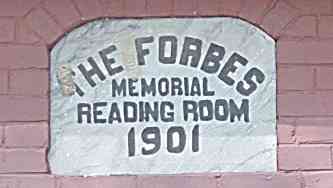 A framed plaque inside the Forbes museum reads: “This Reading Room – It is  hoped in its usefulness will honour the memory of Mrs. Peter Forbes who was a kind, self-sacrificing mother, like many in the community, among whom she lived many of her happiest years, formed many of her pleasantest acquaintances and sincerest friends. May our filial piety cherish the memory of all good mothers

In 2000, a meeting was held with residents of the community of Newington and a Forbes family member, Mr Alan Forbes. The residents in attendance wished to preserve the building and put forward two proposals to Council for the Township of South Stormont. The first was to see the building designated a historical building under the Ontario Heritage Act. The second was to move the building to the Lost Villages Museum site.

The following information was provided by Mrs. Lillian Steels, former Librarian at Newington Public Library. Lillian visited our display at the Newington Fair (2002), and she felt that “her” history of the Newington Library would be of interest to our members.

The History of the Newington Public Library 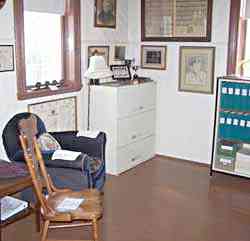 On October 7, 1901, a meeting was held for the purpose of starting a Public Library on the grounds donated by Dr. Munroe. The only condition was that is should be kept open at all times, to all races and creeds. In 1901, George Forbes, a former Newington storekeeper, built a substantial, neat brick building in which the library is located, in memory of his wife, Mrs. Forbes.

“Whereas George Forbes esquire of Montreal has offered to build, equip and fully  donate a building for a Public Library in  Newington”.

“Resolve that we gratefully accept this  offer and that the Institute be known as Forbes Memorial  Library”.

“The board of management consists of seven persons elected annually by the Institute on the first Monday of May each year”.

Church organizations and social groups of the district banded together to supply funds for the upkeep of the library and enlarged the supply of books.

The seven on the board kept the library opened and operating. Then, in 1917, a librarian received a salary of $18.00, to make the fires and keep the building clean. The building was wired in 1928, at a cost of  $34.65. Before, this library was lighted by means of  lamps.  In 1934, the books in the library were catalogued. In 1947, the membership fee was raised to $1.00  for adults and $ .50 for children. With the assistance from the government and the patrons of Newington, and with the  generous help and donations of the Women’s Institute, the  library was kept in operation.

Then, in  1964, the people of Osnabruck Township held an election, and, as a result, the Newington Library became a Public Library in Osnabruck Township. Since 1964, the library has grown steadily, with books coming from the “Regional Library System” and the magazines supplied. With the aid of the township  grant, a greater quantity of books were purchased. We were also permitted to borrow books from the Cornwall Public Library.

The school children, with their teachers,  come to the library every Wednesday, and a story is read to the Grade 1’s and kindergarten children before they take their books home for the week. The children especially look forward to this every Wednesday. The interest of the community  is still high and questions are being asked about our new  system that went into effect in January, 1971. They have a soft spot in their hearts for the place held by the library in the life of the community. They worked hard to keep it in  operation in the past years. In 1964, the total books borrowed  were 1,630, and in 1970, the total circulation was 8,926. Membership in 1964 was 123, and in 1970, it was 355.

Repairs to the Newington Library began in 1969 with a rebuilding of the north wall which had been  damaged at the time of the earthquake. Since then, an inside wall at the back of the library has been added, with new shelves; the heating problem was overcome with the addition of a new furnace and a new ceiling. New light fixtures were added, and the verandah and steps repaired and painted. It was about this time, that we began borrowing books through the eastern Ontario Regional Library Board.  In 1970, the wiring was all changed and flourescent lighting was installed, a desk and chair was purchased, the verandah was again repaired and painted, along with window casings and interior floor. The total cost being $568.11.

We borrowed from Cornwall, 86 books. The  total circulation for 1970 -7,865. Total enrollment 355, 188  children from buses visited the library each Wednesday, and there were 70 local children. At this time, they came during  the noon hour. At the end of this year, there were 2,662 books  in the library. During 1970, Mr. Nyland, Supervisor of the  United Counties Library System, met with Osnabruck Township Council to discuss the possibility of our township going into  the County System, which would include Stormont, Dundas and Glengarry. After much deliberation concerning this change, the  decision was made for us to become a branch in this new system. So, in January 1971, we were one branch among eight in  this new United Counties system and before the year ended, two  more branches were added. When we went into this new system,  the library was open five hours on Wednesday and children came by classes, instead of at noon hour.

The increase in the school enrollment made the number of children  coming at noon hour too great. Another venture was having the library open two hours Saturday afternoon, as well as the  three hours on Saturday night. It has taken a year for the people to realize this added opportunity.

Two islands for books, new curtains and table top covers were added in this first year.  Circulation for 1971 was 11,844, this includes books borrowed through the system. Now each person had to be registered and given a number which remains the same until 1974. Total enrollment at the end of 1971 was 300. All branches have received new books, and  telephones were installed. Our library received some new  shelving. In 1972, the library went under another facelift, the varnished walls were painted a light blue, also chairs and floor, and all the old shelving was taken out and now we have  all new.  Also, a new sign was put up outside. Perhaps Newington has lost a great deal in the last few years,  but I feel we all should be proud of the fact that we have a  library to go to when we wish to.

In  September, 1972, Mrs. Elizabeth Beaudette joined the library  working force and stayed until June, 1983. I was there from January, 1964 until May, 1979.  During these years, the  L.O.B.A. held regular meetings in the library until 1982, when they disbanded with a membership of ten. For the use of the library, they donated a clock, a dictionary stand, and the magazine rack. The library also held District Director meetings for the Women’s Institute. During these past years, a rug was laid on the floor, and more isles for books were put in.  In 1988, Mrs. Scott is the Custodian, and the school  has stopped coming. Circulation is low.  Also, time of opening has changed to Tuesday evening and Wednesday, making a ten hour week. 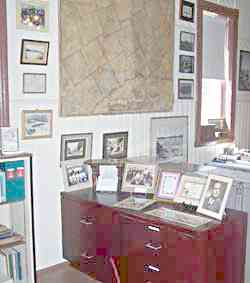 We are grateful to Mr.  Allan Forbes, Cornwall, Ontario, for his work in obtaining  money for the refurbishing of the “Forbes Memorial reading Room”. Allan has approached many members of the “extended” Forbes family, and they have been most generous to the project. We are happy to report that Allan has visited the site in Newington, and he is pleased with the progress of the move. He looks forward to the move of his ancestors “library”  to our museum site, and to the society’s “home” for its documents, books, etc.

As well, genealogy records from the area are available to the public for your research purposes. The Resource Center is open year-round, by appointment.

To obtain genealogy records, contact us to setup an appointment.

Washroom facilities are available from May 1 – October 30