Maple Grove was located two miles west of Cornwal (back when Cornwall ended just past the papermill) along the waterfront, and was located next door to Mille  Roches.  This area includes the icegates, Lock 20, Robertson Creek and includes the area of intense construction associated with  the Powerhouse, the diversion canal with access tunnels, the dike with it’s various borrow pits and quarries.

Captain Jeremiah  French, late of the Kings Royal Regiment of New York, and of Manchester, Vermont, settled the hamlet of Maple Grove in 1784.  French built a magnificent house at the mouth of Robertson Creek and later sold it to his son-in-law George Robertson, also a UEL refugee from Vermont.

The French-Robertson House can now be viewed at Upper Canada Village.

Captain French originally served with the Queens Loyal Rangers and was taken prisoner by the Americans at the battle of Bennington. As a condition of his release, he was ordered not to take up arms against the rebel uprising in Vermont, so he made his way to New York and subsequently joined the KRRNY, under command of Sir John Johnson.

Much of the early activity of the Hydro Power Project was centered on the stretch along the river situated two miles west of Cornwall just “next door” to Mille  Roches. Through the community passed the Cornwall Canal with Lock 20 placed directly across from the area’s  small hotel, a convenient arrangement for fatigued travelers.  Maple Grove became known for its Hydro substation which transferred power across  the river to the United States.  It was here that Robertson Creek flowed into the St. Lawrence River (Cornwall Canal) between  two low hills with the French-Robertson House perched on the north side.

By August, 1955, the construction of the Robert Saunders Power Dam was taking
its toll on Maple Grove.  Thousands of people visited the Lookout, a 25-foot high platform where spectators could view the  developments.  A mile-long diversion canal was dug between Lock 19 and Robertson Creek to avoid the interruption of shipping  activity.

Maple Grove Cemetery was the only graveyard moved in its entirety during the Seaway Project. It was moved from its original location to a new location along the new highway #2, the present day Vincent Massey Drive and just east of Powerdam Drive.  The cemetery is the only visible reminder of the lost hamlet of Maple Grove. 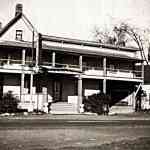 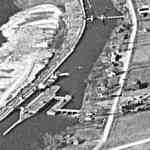 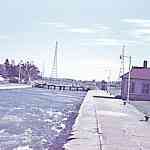 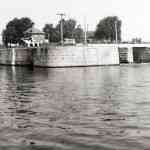 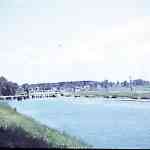 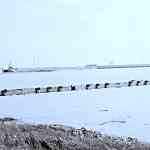 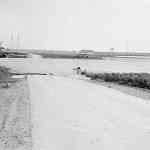 JUST STARTING
Original Cornwall canal and hwy #2, looking west with Lock 20 in the distance. The cofferdam has been completed but the old riverbed hasn’t been de-watered yet.

COAL PILES
The coal dock, hydro substation with the two transmission towers on each side of the canal and just beyond, the Maple Grove cemetery.

MAPLE GROVE AT ROBERTSON CREEK
Looking east, the French-Robertson house, first house on the left, northside of hwy #2. Beyond is the frozen Robertson Creek and summer cabins. At the very top right hand corner one can just make out the tombstones in the Maple Grove cemetery. The roads at the bottom of the photo lead to a construction camp.

NEW ACCESS TUNNEL
Before the new bypass canal was dug, a new access tunnel was constructed. The first tunnel under the original canal was dug in the wintertime so as not to disrupt shipping. Anything too large for these portals went to Lock 19 where a retractable Bailey Bridge carried large pieces of machinery over the canal.

BYPASS CANAL
Bridge to Barnhart Island has been completed, the abutments for the canal door are finished and it’s location marks where the new dike will be, construction has already started 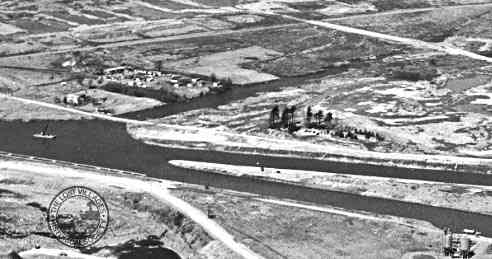 OLD HWY #2 at the entrance to the dam
Maple Grove just west of present day Power Dam drive. The upper half of the large parking lot in the center of the photo is still there today as are the two transmission towers that are standing in the other half of the parking lot. The extreme upper left of the photo shows the access tunnel under the newly constructed bypass canal. The tunnel was filled in as was the section of the canal and is the present day entrance to the power dam. One of the buildings served as a temporary hospital during construction but it’s still uncertain exactly which building it was.

The following information, written by Fred Inglis, was found by Alan  Rafuse, among the documents in the Fran Laflamme collection. Written in the early 1950’s, we are taken back to the hamlet of Maple Grove, and surrounding area. As a follow-up to the information supplied by Fred Inglis, Alan Rafuse has added some remarks.

The original Cornwall Canal, according to a Historical Sites monument(gone missing) at Lock 20, in front of Ernie’s Hotel, was built between 1834 and 1842.  It was enlarged between 1876 and 1904.  Work went on continuously to improve it.

King of the rustic raconteurs I’ve met here so far is Jim Roys, 85-year old retired farmer, who lives alone in a century-old farm home on the highway, just east of here. Unshaved, healthy, except for a touch of rheumatism in his knees, for which he uses liniment that will blister a horse, he stands as straight as a ramrod.  His sturgeon fishing days are an epic in themselves.

Jim was a hot fiddler in his day, played violin in a four-piece orchestra on  excursion boats on the river.  “The others were Charlie Wright, he was a good violinist, William McNairn and John Fulton, but they’re all dead,” Jim recalled.  We played on the “Minnie K”, an old side-wheeler, he added.

Born of U.E. Loyalist  stock, five generations of them now buried in Maple Grove Cemetery near here, and one of the oldest in Upper Canada, Jim has a long, clear memory, can name you day and date. Jim stuffed another stick of wood in the ancient kitchen stove, reached behind him for a leaf of crude tobacco, stuffed it in his pipe, lit it with a big match and puffed reflectively. “There were five mills opposite the hotel in Mille Roches, but they all went up in smoke,” he recalled. “Two or three houses went with them.

There was a grist mill, a saw mill, a butter tub factory, a shingle factory, all  run by water.  It was an awful fire. I was about 12 then. They were never rebuilt.”  “There were two hotels in Old Mille Roches, tremendous big places, where coach people stopped over.  There was a big ballroom upstairs in each hotel.”  Jim relit his pipe and continued. “There was a hotel at Moulinette called the “Pea  Green”, but it was torn down.”

Jim’s father, William Roys, was a lumber man and had shanties in the bush when this land was covered with timber.  He built rafts of logs and loaded them with cordwood and floated them down to Montreal, where he was paid for them in silver. No Paper Money I remember when I was a boy,” said Jim, “he brought home a bag of silver and put it on the table.  It was so heavy, I couldn’t lift it.  There was no paper money in those days.”

In an open shed behind Jim’s  house, I saw many relics of a century ago; an Indian sled and a  child’s sleigh, made by Jim’s father; a cider press, “It cost $80.00.”; a harness maker’s saddle; a barrel churn; cider kegs; and  a Snider rifle. But the most interesting was a stone house, about 12 feet square. “That’s a bake house, ” said Jim, with a smile. “You’d better have a look at that.” As the door opened, I saw three brick hearths. Above the right hand one was a bake oven, which Jim said baked enough bread to keep the shantymen for a week.  The left hand one was covered by an iron kettle, used for butchering and the centre was an open fireplace, with an iron crane, used for general purposes. As I glanced at a smoke charred log overhead, with nails in it, Jim explained, “That’s where they smoked hams.”

I think a historical society should preserve these priceless relics before the waters of the proposed St. Lawrence Seaway swallow them up for all times.
“There will be no deep waterway, ” Jim declared, solemnly. “There are American people making a living at keeping it going. One sides wants it, and the other side working against it. It’ll never come.”  But that’s not the way Transport Minister Lionel Chevrier, QC, of Cornwall, sees it. If he and his government have their way, Canada will go it alone, if it can get the necessary authority from the U.S. side. It has the pledged co-operation of power people on both sides.

If this country is going to support 45 or 50 million people they say Canada will have in the next 30 years, this large and latent power resource must be  harnessed.  If the products of our farms, forests and factories are to reach foreign markets in ever-increasing quantities, then the Seaway must be deepened to accommodate larger vessels from overseas.  Most people here believe it is only a matter of time, perhaps three years, maybe five.

Apparently, a few years before the Seaway and Power Projects, Stanley McNairn wished to buy the  Roys farm. Jim Roys would have nothing to do with it and, instead, sold the farm to a Merpaw family.  It would be interesting to know if that is the same family that acquired “Pioneer Corner”. Anyhow, Jim Roys lived in his home, (more or less as a hermit) until the house burned.  He was getting quite disabled with arthritis and needed periodic assistance to go into Cornwall (or wherever) for supplies.

There was a fellow who worked on the Guard-Gate, (right next to Jim’s house), who took Jim shopping (bartering) once a month, and checked on him almost daily.  This fellow’s name was Harry Pescod.  Bob Fyckes would probably have more information and memories of that, as he also worked at the same place.  It was one day when Jim was taken into town that his house burned,  while he was away.  The Hydro boys were burning brush and trees, between Jim’s house and Welland Hartle’s cottages, with the wind from the east. 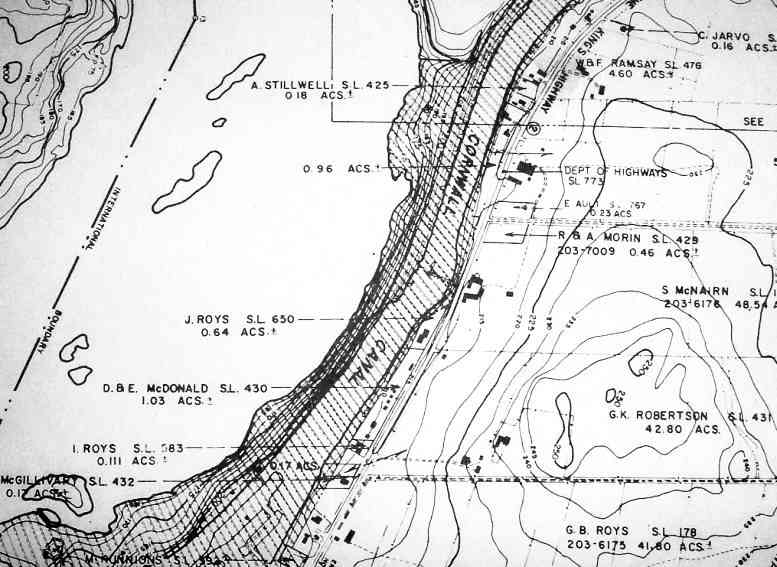 The age of Jim’s frame house  made it like a tinder-box. All it needed was a spark. There were  questions at the time whether it was done deliberately, so they  wouldn’t have to move it.  If the wind would have been  westerly, would they have burned eight or ten cottages?  We’ll never know.  Jim was forced into a nursing home, and only lasted a  few weeks, succumbing to a fragile, weakened, and shall we say,  broken heart.

P.S. My grandfather, (mother’s dad) visited with Jim Roys on a weekly basis, all through the summer.  I used to tag along once in a while and listen intently to their stories of the late and not so late, 1800’s. They were both about the same age.  My mom’s  dad was born in 1867, Confederation Year.