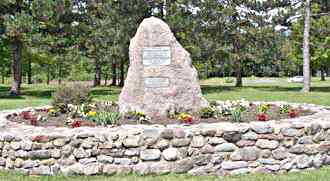 Ault Park is the Township of South Stormont’s oldest  park, having been established in the former Township of  Cornwall in 1914. The “original” Ault Park, situated on Sheik’s Island, Cornwall Township, was inundated on July 1, 1958. The Ault Stone was moved from Sheik’s Island to the mainland prior to the inundation.

A plaque on the Ault Stone states:

“To the people of the Township of Cornwall in loving memory of my parents, Simon William Ault and Caroline Brownell Ault who spent long and useful  lives in this immediate vicinity – in Mille  Roches, Moulinette. This park is given May 23, A.D. 1914. Levi Addison Ault, Cincinnati, Ohio.”

In a re-dedication ceremony in 1959, the following inscription was added to the stone, on another bronze plaque:

At the time of the Hydro and Seaway projects, brick and  stone building materials were removed from homes which weren’t moved and these products were used in the construction of two fireplace barbecues and a foot bridge in AultPark. The stone foot bridge connects the park to Fran Laflamme Drive, named after The Lost Villages Historical Society’s first president (1977), Fran Laflamme.“With the co-operation of the Ault family this park has  been provided to replace the  original park  formerly located on the westerly end of  Sheik’s Island on land now flooded. The Hydro-Electric Power Commission of Ontario 1959.”

The Lost Villages Museum is located in Ault Park on Fran Laflamme Drive, 3 kilometres east of Long Sault, Ontario. The museum site consists of ten heritage buildings, moved and restored to Ault Park from The Lost Villages and surrounding townships by the members of The Lost Villages Historical Society. Both the interiors and exteriors of the buildings have been restored, and they have been assembled in a village-like setting at Ault Park. The buildings commemorate the inundation of lands to the south of the museum complex on July 1, 1958.

Admission to the museum site is free,

However donations are very much appreciated.

During your visit, stop by the General Store and pick up a copy of our self-guided walking tour. Browse the museum site at your leisure using our information guide, or your mobile device, as our website is now compatible.